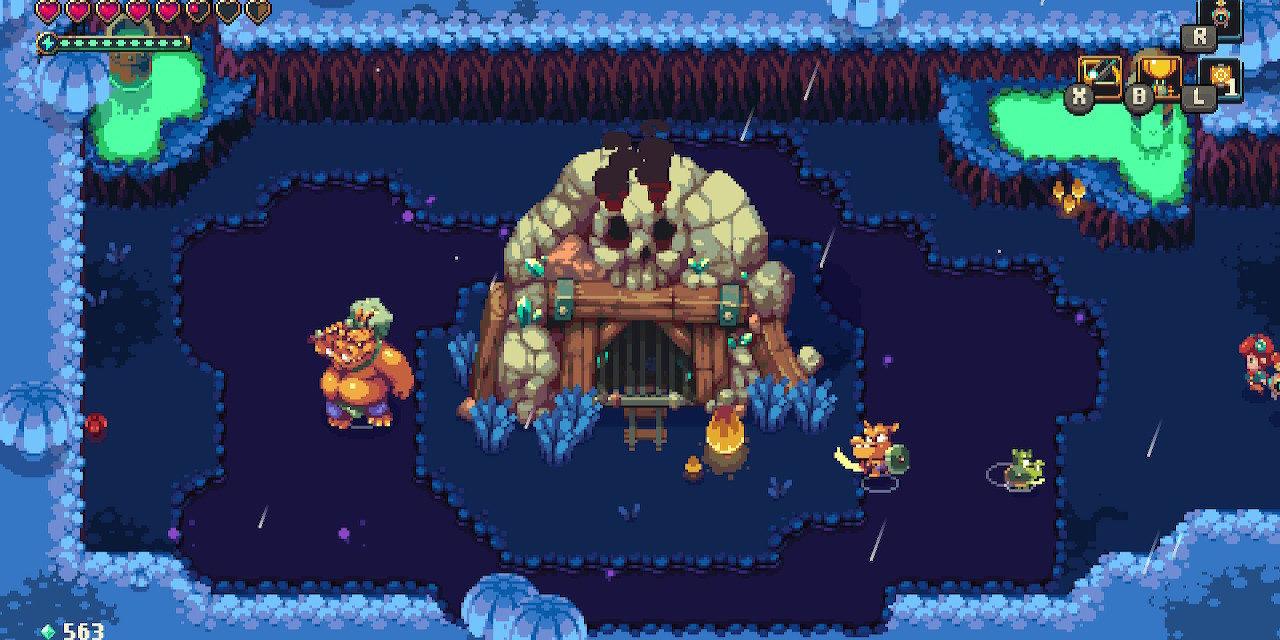 The premise for Sparklite sees a world where constant earthquakes shake up environments and the only true refuge is in the sky. Everytime you drop to the world below it’s both familiar and different; the environments are made up of different tiles, and like a game of Catan, they’re shuffled anew on every trip. It’s your job to learn and navigate this ever-changing land while upgrading your abilities so you can take down Mining Titans bent on further destroying the world. It starts off as an exciting adventure full of challenge and variety, but that’s not something that lasts forever.

Sparklite is a 2D roguelite whose bright and vivid pixel art environments feature prominently. The main world is shrouded when you first enter it and is divided into squares which take up the whole screen, much like a classic Legend of Zelda game. Moving through and uncovering the layout of the area provides a sense of discovery, especially in the early runs, and each square presents a scenario which will become familiar over time–the layout and enemies for map squares will stay the same, but you won’t know which variant you’ll get until you arrive. Each scenario feels like a crafted experience, each featuring its own unique little challenge or puzzle, but they still have random elements that keeps things fresh–hidden elements can be found breaking boulders or digging up treasure.

This structure, along with the visual flair and the rousing score full of synths and horns, help to evoke the adventurous feelings of classic JRPGs. The pixel art is exciting and bright, and the enemy and world designs have a stoutness that is reminiscent of a very particular style of top-down console adventure game. But despite being a throwback game, Sparklite’s movement and combat feel modern–they’re responsive and smooth. There are two different strengths of melee attack, and as the game progresses, different ranged weapons also become available to you. Ranged weapons rely on a form of energy generated by attacking enemies with your melee hits, and this creates a satisfying flow. There’s no standing back and trying to pick off enemies from a distance; instead, the game forces you to focus on the melee moves, which means you’re always in the thick of things. It’s an exciting challenge to be constantly on your toes, never able to totally avoid danger, and learning enemy patterns to stay alive.

This is made especially engaging because of all the different enemy types. Every time you enter a new environment you’ll discover new creatures who have different attack patterns, defences, and behaviors to learn–some will even let you by peacefully. There’s a real sense of danger when going to an unknown place, which later evolves into a sense of mastery once you’ve gotten a handle on the enemies there.

This goes doubly so for Sparklite’s intense bosses, as each of the five Mining Titans bring a slew of unique moves to the table. Every time I encountered a new boss I’d die, baffled at how to proceed. One boss in particular presented only one weak spot on its front, but that’s also where it would readily produce pincers. It could shoot missiles and laser beams, as well as cause sinkholes with a stabbing scorpion tail. I found myself mastering the pattern for one series of attacks only to quickly get taken down by the other. Overcoming these fights requires you to learn how each enemy attack works in tandem, on top of finding a safe opening to attack. Learning a little bit more after each death is a great sensation, and Sparklite definitely offers a real sense of accomplishment when you finally come out of the other side of what was once a difficult fight with barely any damage.

However, there are some occasions where combat just feels unfair. Little things, like enemies being able to hit you when they’re not even on the same screen as you, or being perpetually frozen by two enemies shooting staggered ice balls, can be incredibly annoying. I felt this especially hard during the final boss battle, where a bombardment of enemies would all jump on me in a staggered pattern, keeping me in an indefinite loop of knockdowns. There are ways to try to avoid all of these situations, but if you’re unlucky enough to get caught by them, they’re nigh impossible to get out of, especially if you’re already low on health.

Consumable items also play a large role in combat. You can find and collect an array of bombs, buffs, and healing items every time you drop down to the planet’s surface. They offer new strategies to defeat tough enemies or increase your survivability. However, you don’t keep any of them when you die. This creates the risk-reward dynamic seen in most roguelites–is it worth stockpiling items for an upcoming boss, or better to use them now and increase your chances of survival?

The downside to items in Sparklite is that most of them take a while to activate, and while you can get permanent buffs that help with this, using them during tough combat encounters is often more of a liability, which makes certain items feel useless. In some boss battles, I found bombs could be quite effective, for example, but in others, finding the downtime to set them off is often just too risky. Even taking the time to heal can be a tough and dangerous choice, so learning when to do so becomes crucial. Weapon items that I wanted to use and make me feel powerful often felt like they got me killed, and with such limited opportunities to use items, I ended up using them very sparingly and with trepidation.

Items are also completely random, so it’s easy to find yourself stocked with a bunch of things you may not even need. One item’s sole job is to illuminate dark areas, and there are only so many times you’ll ever want to use it. On the other hand, health is few and far between so repeatedly getting one item over the other can be very frustrating.

Randomness can also negatively affect your experience with other systems, like permanent upgrades. Permanent items are kept upon death, which means that death doesn’t usually feel too punishing, and instead feels like an opportunity to go back to the Sky Refuge and rework your loadout. You equip upgrades by slotting them into a grid–some will be larger than others, and you have to prioritise what you think you’ll need. It’s a neat little system, and experimenting with it is a rewarding exercise because you can see a tangible difference reflected in your character. However, this is the only way to level up your character, and though the game will let you buy some upgrades (like health buffs) as a guaranteed item, others are up for you to stumble across randomly, which can affect your trajectory of progress. This is a characteristic of the genre, of course, but that doesn’t mean it isn’t frustrating at times.. It wasn’t until I was facing one of the final bosses that I finally found a second damage upgrade, for example, something I desperately needed and explored the map several times in search of.

I also encountered a few frustrating bugs in the Switch version of the game which interrupted my progress; crashing during loading screens made me sacrifice more than one of my more lucrative runs. Even aside from bugs, sometimes loading screens seemed ridiculously long as I got into the later areas–areas which also felt like they weren’t anywhere near as diverse in design as earlier ones. Even the random dungeons, which you can find by breaking objects on all the maps, repeat far too often and by the end I could tell which one I’d dropped into immediately. Skipping these dungeons means fewer items and less currency, which in turn means a lower chance of survival or an inability to afford bigger upgrades. Their necessity means it eventually becomes a chore to do the same thing over and over again for random, often disappointing rewards.

This repetition in design seems especially odd when you consider that other puzzle aspects of the game are often introduced once and barely used again. For example, each time you discover a new ranged weapon, you’ll have a comprehensive tutorial on how to use it so you understand what puzzles it’ll work for. Several of these items went almost completely unused after I’d acquired them because I never came across an opportunity for them.

Sparklite has a great amount of challenge and diversity–until it doesn’t. When things are going well in the early game, progress always feels real and attainable, so it’s enjoyable to go exploring the world for whatever you’ll find next. The game’s upgrades are satisfying to implement (so long as you can find them) and there’s a real sense of growth and achievement. But when Sparklite gets you with an unfair death or technical issue that sets you back, and later causes you to do the same thing over and over again, it’s hard to endure. In the moments where I didn’t encounter these kinds of setbacks, I felt consumed by the desire to find more upgrades, learn how to defeat that boss, and unlock a new area. Sparklite’s loop can be rewarding, but not when it’s extended beyond its means. 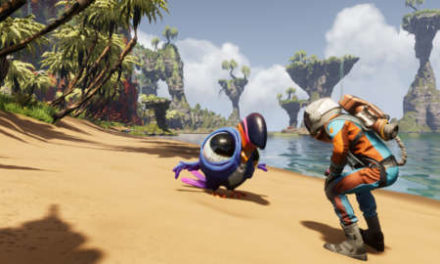 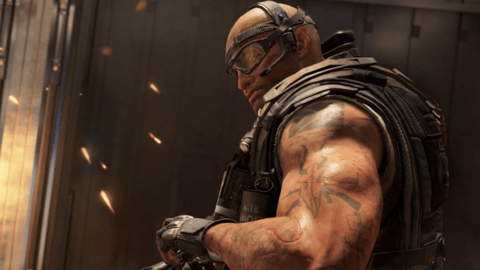 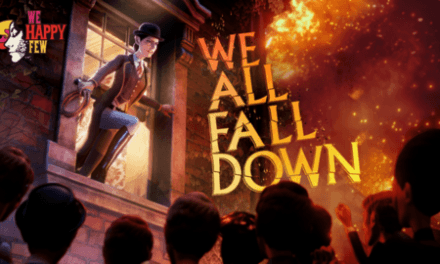 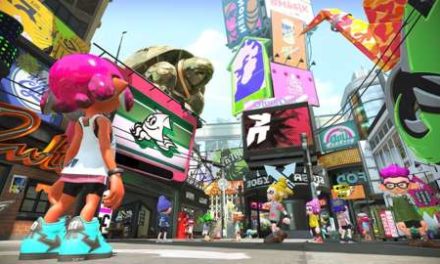